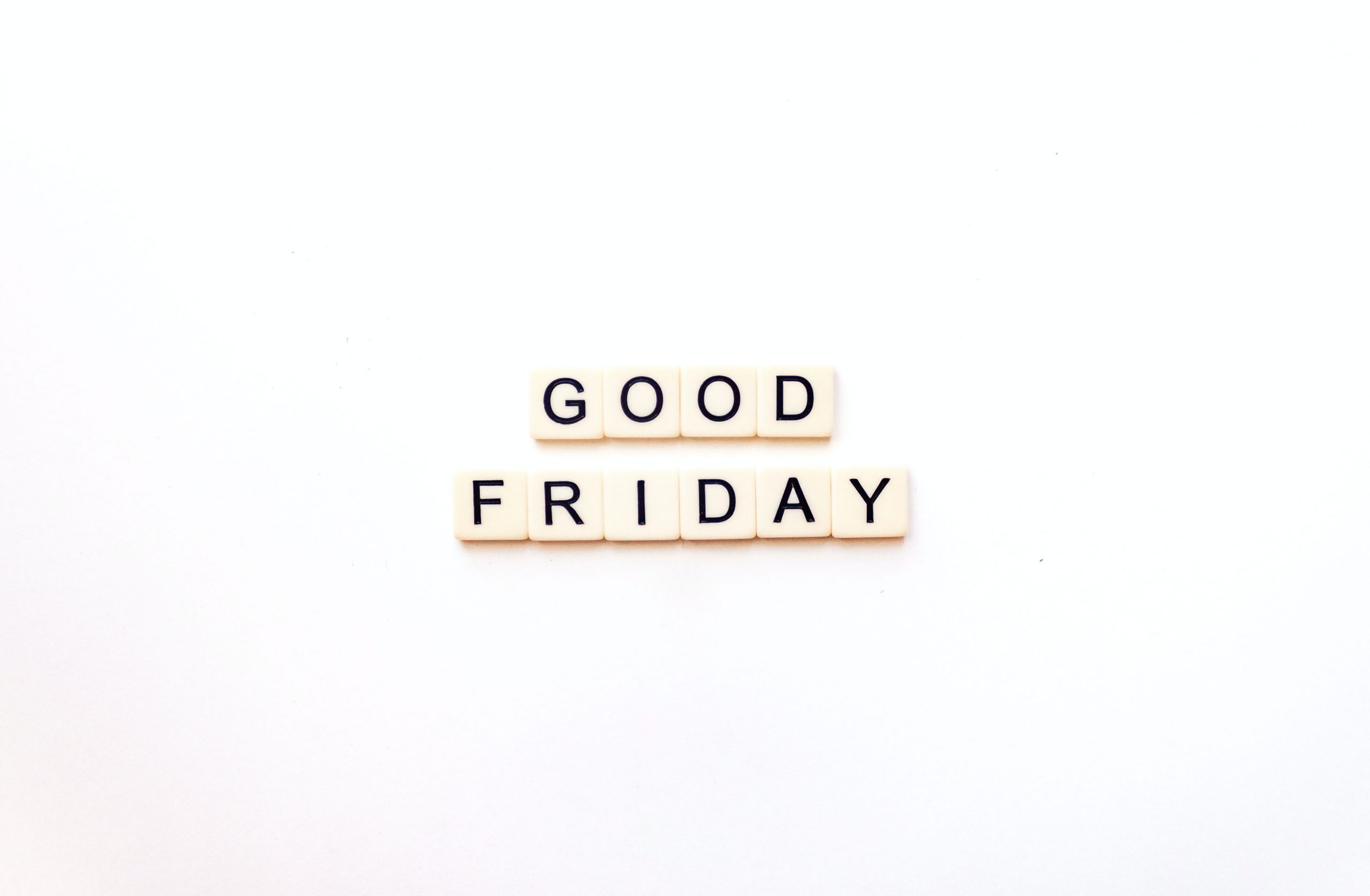 Good Friday – What does it mean?

15 Very early in the morning, the chief priests, with the elders, the teachers of the law and the whole Sanhedrin, made their plans. So they bound Jesus, led him away and handed him over to Pilate.

2 “Are you the king of the Jews?” asked Pilate.

“You have said so,” Jesus replied.

3 The chief priests accused him of many things. 4 So again Pilate asked him, “Aren’t you going to answer? See how many things they are accusing you of.”

5 But Jesus still made no reply, and Pilate was amazed.

6 Now it was the custom at the festival to release a prisoner whom the people requested. 7 A man called Barabbas was in prison with the insurrectionists who had committed murder in the uprising. 8 The crowd came up and asked Pilate to do for them what he usually did.

9 “Do you want me to release to you the king of the Jews?” asked Pilate, 10 knowing it was out of self-interest that the chief priests had handed Jesus over to him. 11 But the chief priests stirred up the crowd to have Pilate release Barabbas instead.

12 “What shall I do, then, with the one you call the king of the Jews?” Pilate asked them.

14 “Why? What crime has he committed?” asked Pilate.

But they shouted all the louder, “Crucify him!”

15 Wanting to satisfy the crowd, Pilate released Barabbas to them. He had Jesus flogged, and handed him over to be crucified.

16 The soldiers led Jesus away into the palace (that is, the Praetorium) and called together the whole company of soldiers. 17 They put a purple robe on him, then twisted together a crown of thorns and set it on him. 18 And they began to call out to him, “Hail, king of the Jews!” 19 Again and again they struck him on the head with a staff and spit on him. Falling on their knees, they paid homage to him. 20 And when they had mocked him, they took off the purple robe and put his own clothes on him. Then they led him out to crucify him.

The Crucifixion of Jesus

21 A certain man from Cyrene, Simon, the father of Alexander and Rufus, was passing by on his way in from the country, and they forced him to carry the cross. 22 They brought Jesus to the place called Golgotha (which means “the place of the skull”). 23 Then they offered him wine mixed with myrrh, but he did not take it. 24 And they crucified him. Dividing up his clothes, they cast lots to see what each would get.

25 It was nine in the morning when they crucified him. 26 The written notice of the charge against him read: the king of the jews.

27 They crucified two rebels with him, one on his right and one on his left. [28]  29 Those who passed by hurled insults at him, shaking their heads and saying, “So! You who are going to destroy the temple and build it in three days, 30 come down from the cross and save yourself!” 31 In the same way the chief priests and the teachers of the law mocked him among themselves. “He saved others,” they said, “but he can’t save himself! 32 Let this Messiah, this king of Israel, come down now from the cross, that we may see and believe.” Those crucified with him also heaped insults on him.

The Death of Jesus

35 When some of those standing near heard this, they said, “Listen, he’s calling Elijah.”

36 Someone ran, filled a sponge with wine vinegar, put it on a staff, and offered it to Jesus to drink. “Now leave him alone. Let’s see if Elijah comes to take him down,” he said.

37 With a loud cry, Jesus breathed his last.

38 The curtain of the temple was torn in two from top to bottom. 39 And when the centurion, who stood there in front of Jesus, saw how he died, he said, “Surely this man was the Son of God!”

40 Some women were watching from a distance. Among them were Mary Magdalene, Mary the mother of James the younger and of Joseph, and Salome. 41 In Galilee these women had followed him and cared for his needs. Many other women who had come up with him to Jerusalem were also there.

Good Friday is the day that Christians all over the world remember the death of Jesus. It may seem off that it’s called “Good” Friday when you are remembering the death of someone, but in this case it’s completely different to what we know. When this day was named “Good Friday” the people calling it this knew what happened already, they knew how things ended, so to them it really was a Good Friday.

Of course we can read ahead in the bible and discover what happens after this day. Jesus is resurrected to life on Easter Sunday.

Before our reading takes place, Jesus has been praying in the garden of Gethsemane. He knows what is coming, and what he is going to have to go through, and so he asks God: if there is any other way of doing this, please, let’s do that instead? But really, he already knows that this is the only way to achieve the task he was sent here to accomplish.

You see, Jesus didn’t just pop down to earth from Heaven to have a good time and make some friends. He came here to show people who God is, and that he still loves them, and is working for them in Heaven, and he also came to earth to destroy the power of evil over the population of the world. He came to sacrifice himself to save everyone else. This is something that was prophesied about many times throughout the bible, both in the Old Testament and the New.

So why does Jesus not stand up to Pilate and tell him what’s going on, and plead his innocence (after all, he isn’t guilty of anything they are throwing at him!)

It’s because he knows that to win this battle over evil, he must die. He can’t just die a natural death, but he must be killed at the hands of those who are evil. So he goes along with what they are saying.

Pilate realises there is something different about Jesus, and he can’t just let that slip so he tried to let Jesus off. However the crowd outside the palace have been stirred up by more evil people, and so they all vote for Jesus to be crucified.

When the time comes, Jesus is taken to the Golgotha (which means “place of the skull”). They make him carry his own cross there in an attempt to humiliate him further. Crucifying, is a horrible form of capital punishment; and is something that they used for the most horrific of crimes. So this for Jesus, who is innocent, is a terrible way to die. It could take hours and hours. If you are unfamiliar with how they crucify someone and would like to know more, click the “more” icon at the bottom of this blog.

At 3 in the afternoon Jesus took his final breath.

Even as he did so, a Centurion who was standing guard realised that this man that he had just helped to kill truly was the Son of God. How would that have felt to realise in that moment what you have just done?

Jesus friends and family had travelled some great distance to be there with him in his final hours, and they would have witnessed this happening. I can’t begin to imagine what it must have been like for them. To know this man, to love him, and to see him dying on a cross, knowing that there isn’t anything that you can do to help him.

On that day, all those years ago, the Son of God took his final breath and died.

Lord, I will never be able to thank you enough for what happened all those years ago. For the obedience of Jesus, for the power of what happened. I thank you for everything you did, in order to make sure I was able to be free from evil. I ask that you will always help me to remember this amazing gift, that Jesus died an innocent death so that I might be free. Amen.

Jesus, the Son of God, was killed by evil human beings for a crime he did not commit. However, this was part of the plan and is the beginning of God saving the world from Evil.

This week, see if you can find any opportunities to help your friends or your family to be safe from something evil.

How do they Crucify Someone?

To crucify someone they used very long nails to hold a person to a cross made of thick and sturdy timber. The nails would be positioned through the wrists, and through the feet. This would hold the person upright. It was not the pain of having this done that would kill the person, but in most cases it was suffocation, as the muscles in the body are no longer able to support the weight. The torso slumps forwards, and it would become very hard to breathe. This can sometimes take a very long time. The people would often be left there for quite some time to make sure that they had died. It would have been a horrible thing to witness.