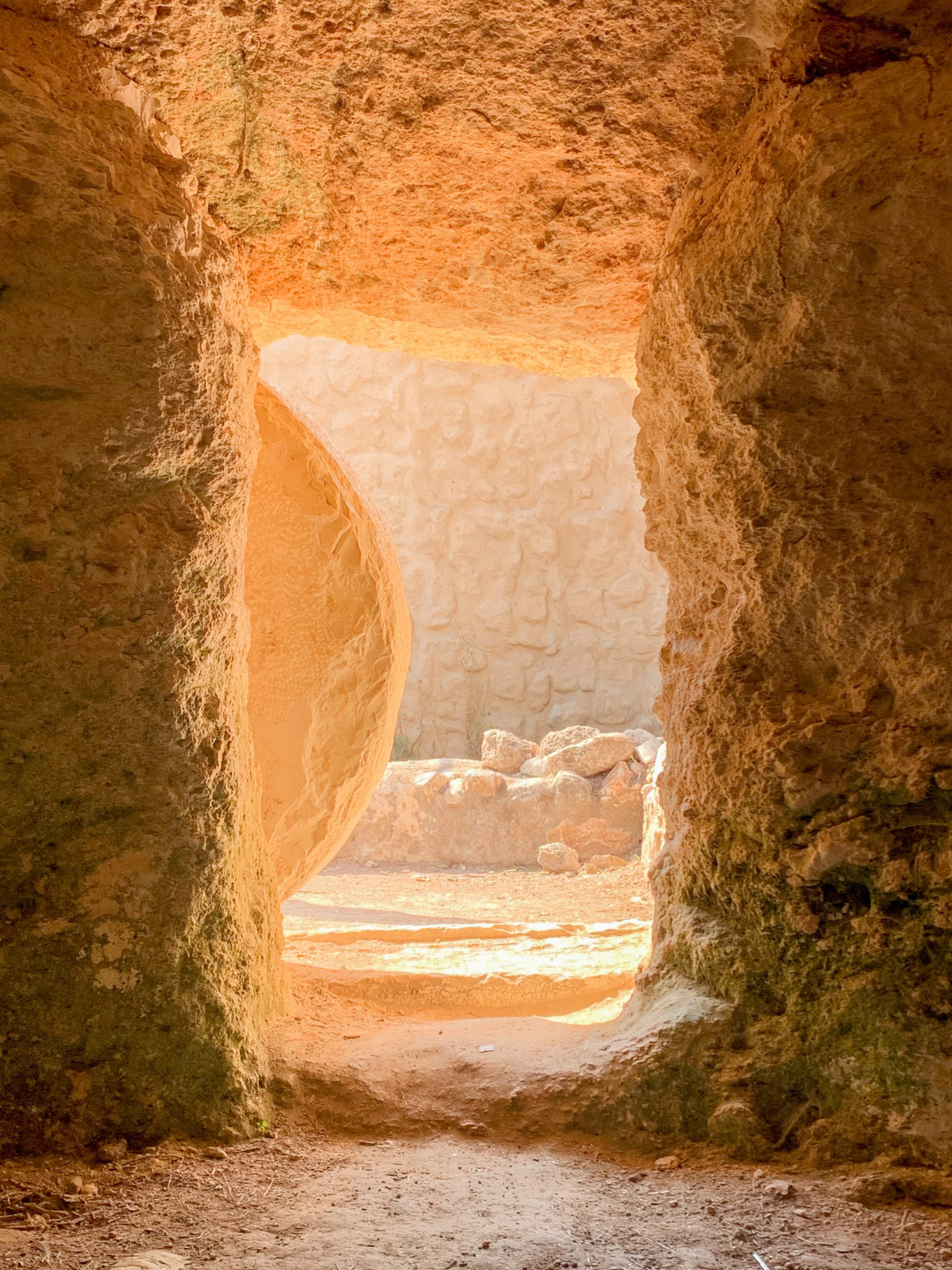 Easter Sunday – What’s it all about?

1 When the Sabbath was over, Mary Magdalene, Mary the mother of James, and Salome bought spices so that they might go to anoint Jesus’ body. 2 Very early on the first day of the week, just after sunrise, they were on their way to the tomb 3 and they asked each other, “Who will roll the stone away from the entrance of the tomb?”

4 But when they looked up, they saw that the stone, which was very large, had been rolled away. 5 As they entered the tomb, they saw a young man dressed in a white robe sitting on the right side, and they were alarmed.

6 “Don’t be alarmed,” he said. “You are looking for Jesus the Nazarene, who was crucified. He has risen! He is not here. See the place where they laid him. 7 But go, tell his disciples and Peter, ‘He is going ahead of you into Galilee. There you will see him, just as he told you.’”

8 Trembling and bewildered, the women went out and fled from the tomb. They said nothing to anyone, because they were afraid.

[The earliest manuscripts and some other ancient witnesses do not have verses 9–20.]

9 When Jesus rose early on the first day of the week, he appeared first to Mary Magdalene, out of whom he had driven seven demons. 10 She went and told those who had been with him and who were mourning and weeping. 11 When they heard that Jesus was alive and that she had seen him, they did not believe it.

12 Afterward Jesus appeared in a different form to two of them while they were walking in the country. 13 These returned and reported it to the rest; but they did not believe them either.

14 Later Jesus appeared to the Eleven as they were eating; he rebuked them for their lack of faith and their stubborn refusal to believe those who had seen him after he had risen.

15 He said to them, “Go into all the world and preach the gospel to all creation. 16 Whoever believes and is baptized will be saved, but whoever does not believe will be condemned. 17 And these signs will accompany those who believe: In my name they will drive out demons; they will speak in new tongues; 18 they will pick up snakes with their hands; and when they drink deadly poison, it will not hurt them at all; they will place their hands on sick people, and they will get well.”

19 After the Lord Jesus had spoken to them, he was taken up into heaven and he sat at the right hand of God. 20 Then the disciples went out and preached everywhere, and the Lord worked with them and confirmed his word by the signs that accompanied it.

How amazing is that?

It’s so astonishing that even those closest to him, who have known him for years don’t even recognise him to start with. People were afraid to start with, because this is something that isn’t supposed to happen right? People don’t just come back to life 2 days after they have died… but Jesus did.

Why did he come back to life you ask?

Jesus died and went to a place without God, and he came back from that to Earth. Jesus overcame everything that we think is evil. And why? So that you nor I would ever have to experience that.

This is so important and so exciting because Jesus has paid the price for every single one of us. No matter who we are, or where we come from. If we believe in Jesus, and put our trust and our faith in him, then he will save us from certain death, and instead offer us eternal life with him in Heaven.

You may have heard the term “Sin” used in church settings before; if you don’t have a clue what it means then I’ll let you in on the secret… it means anything that makes God unhappy. Doing something that goes against God’s ideals is sin. That could be lying, or stealing, or murder, or something else entirely.

The good news is, that we can be forgiven for all of those things that we do that upset God, because Jesus has paid that price for us. All we need to do is say sorry and God will forgive us. Then we can try not to do it again.

We don’t need to be scared of death, Jesus has taken care of that for us. We can live is hope, and in wonderful assurance that when we pass on from this life; if we put our faith in God, and in Jesus and we seek to live our lives as best we can in His ideals, then we will have a life eternal with them.

Isn’t that worth celebrating today?

Lord, wow. Thank you so much for this amazing gift. Thank you that you sent your Son to earth, so that he would die in my place at the hands of evil, so that I could have the opportunity of eternal life with you. Amen.

Jesus rose from the dead to give you the freedom to live a life without fear, and to offer you life eternal in heaven.